Bitcoin: Introduction to Cryptocurrency & Blockchain
We recommend that you use Google Chrome for the best browsing experience
View Session
LOGIN
SIGN UP 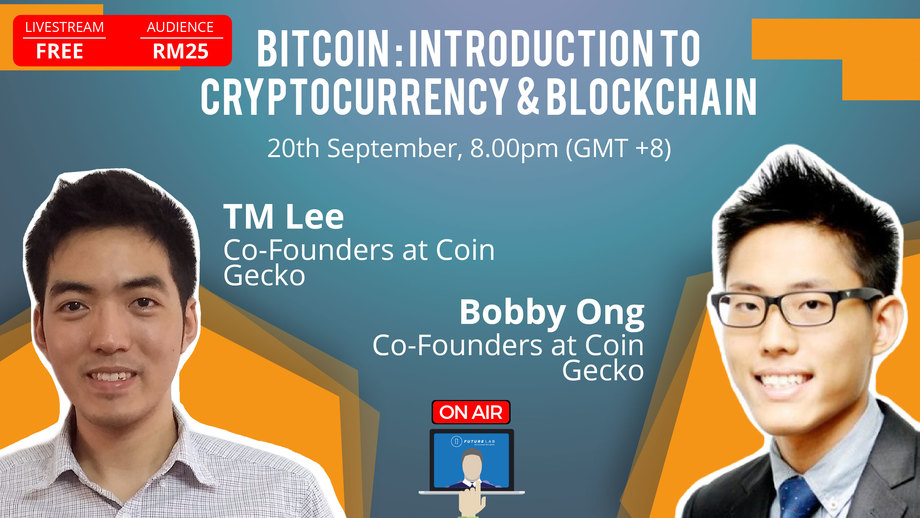 Bitcoin is the first 'decentralised' digital currency. They are digital coins sent through the internet. No one controls it or prints it, but it is produce by people, and increasingly business, running computers all around the world, using software that solves mathematical problems.

An anonymous software developer called Satoshi Nakatamo proposed bitcoin in 2009, which was an electronic payment system based on mathematical proof. The idea was to produce a currency independent of any central authority, transferable electronically, more or less instantly, with very low transaction fees.

On the 20th of September at 8.00pm (GMT+8), join us for a talk by the founders of CoinGecko. Cryptocurrency ranking website that aims to give a 360 degree overview of all the various cyptocurrencies in the market.

During this talk, TM Lee & Bobby (Founders of CoinGecko - https://www.coingecko.com/en) will take you through

Tickets:
a. To watch online: free
b. To attend the talk at FutureLab.my: RM 25.00
Refreshments will be served and all earnings from tickets go to our education initiatives